Blog Tour: Secrets Behind The Billionaire's Return by Rachael Stewart* 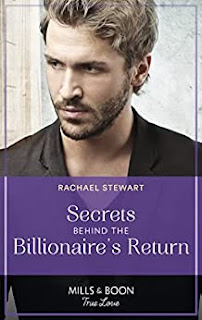 'Has he returned to claim her heart…?

In this Claiming the Ferrington Empire story, sixteen years ago Felicity fell in love with the boy from Ferrington Manor. But when Sebastian vanished she was left with the secret consequence of their love… And now he’s back! Will the revelations about his departure be enough for Felicity to succumb to the feelings that still draw her to him?'

This is the story of Sebastian and Felicity (aka Flick). There story is the first one in the brand new series called ‘Claiming the Ferrington Empire’. There story is told over the course of 16 Chapters plus an Epilogue.
Right from the start readers will become intrigued about the past these two share as well as whether this pairing have a future. Even from the outset when the truths about the past are being spilled, it is clear for readers to see that Sebastian hasn’t let it all spill out. This secret that Sebastian is hiding from both Flick and the readers will keep you guessing as to what needs to be revealed.
Throughout this story the point of view switches between both Sebastian and Flick. This means that the readers get a full story and account of everyone’s feelings. This is also interesting as when you see Sebastians point of view, you can really get a sense of exactly who this character is and who Flick is to him.
The moment these two characters meet again it is clear to see that they have chemistry and that neither one is immune. However that doesn’t mean neither one wants to admit the chemistry is there or even act in it.
Although Flick and Sebastian are the main characters, the reader gets introduced to many background characters including Sebastians younger brother Theo and Flicks best friend Bree. Now although they are background characters it is easy for the reader to fall in love with them and wonder at the possibility of whether we are meeting the stars of book 2?

Overall Rachael has brought readers another great read that is easy to get stuck into. It’s full of characters that readers can fall in love with and chemistry that sizzles. You can get your copy HERE

There is also a giveaway attached to this Publication Day where you could be in with the chance to win 4x Rachael Stewart signed paperbacks (Tempted by the Tycoons Proposal, Surprise Reunion with his Cinderella, Beauty and the Reclusive Millionaire & Secrets behind the Billionaire’s Return) as well as a ‘Hug’ bracelet, Diamond Metallic Pen and some Heart post it’s. You can enter this giveaway HERE. Don’t forget to read the Terms and Conditions: