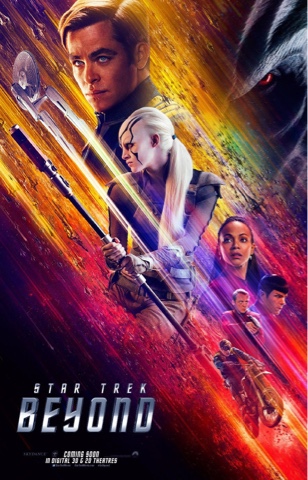 Star Trek Beyond is the latest movie to come from the Star Trek Franchise. It's the third movie to join the latest Star Trek releases. After seeing the first two in this series there were some high hopes from the fans. This movie is a new release to the cinema and only came out on Friday 22nd July 2016.

So before we go into the details regarding what the film is about lets talk statistics. This film has a running time of 2 hours and 2 minutes, which is the shortest length for the newest Star Trek films. This film was directed by Justin Lin, who has also directed 4 of those Fast & Furious movies. Some of the stars in this picture include Chris Pine, Zachary Quinto, Karl Urban, Zoe Saldana, Simon Pegg, John Cho, Anton Yelchin and Idris Elba. After looking at the reviews it seems this film has had some very mixed opinions following it's release. Some people are stating its covering up the story with action and explosion. I will admit the main reason I watch these films was Chris Pine. But I will admit a cute guy will not be enough incentive to sit through a boring film. I loved the story telling of this film, there was enough action to keep me intrigued. At some points in this film I had no idea how Kirk and the rest of the USS Enterprise were going to get out of their situation.

All in all I say this film is definitely worth seeing.

Posted by Lemon Nail Fiend at 09:00 No comments: