Review: My Year with the Billionaire by Rachael Stewart* 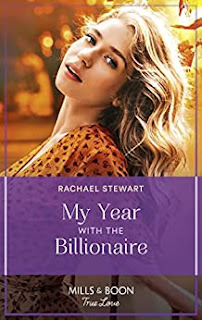 'My twelve months of sacrifice…

My foster mother’s will states that I, Summer, must live with her grandson, infamous billionaire Edward Fitzroy, for one year on her Scottish estate or we forfeit our inheritance! Years ago, scared of our intense connection, I left without saying goodbye… Now I’m completely unprepared for how devastatingly attractive Edward’s become—and how he still makes me feel. We’re from different worlds—surely this can’t work? But it’s oh-so-tempting to give in to the sparks flying between us…'

This is the story of Edward and Summer, which is told over the course of 15 Chapters as well as a Prologue and Epilogue. Now you may think 15 chapters is not a long book but let me tell you that Rachael truly adds a lot of detail so it doesn't ever feel like a short book.
Not only this but this entire book is so easy to get into that readers will barely notice the chapters going past because they will be too enticed by the book and its contents. This book grabs the readers interest in the Prologue and refuses to let them go until they have read every word including the Epilogue.
Now Edward and Sophie's story is very much a second chance romance. Their past is slightly delved into within the Prologue, but is also revealed throughout the book. Edward is the optimum of a good straight laced guy who is also scared. Scared about getting hurt. Whereas Summer is a free spirit who doesn't believe she is lovable. These qualities give Summer a vulnerability that readers will love.
Getting this insight into Edwards emotions and feelings really helps the reader connect to the characters. Not only that but the clear point of view changes really give the reader the full 360 of what is going on throughout the book. They get the chance to see why a character is acting the way they are.
Readers will love the slice of steaminess that Rachael brings to the book, that adds to the whole story without taking anything away. It adds to the entire romance that is the main theme for this book.

Overall I loved this book as well as the whole second chance romance that is the theme for this book. Rachael has written another great book that readers will find easy to get into and hard to put down. This book is out on September 1st and you can get your copy HERE.

Posted by Lemon Nail Fiend at 17:00 No comments:

Blog Tour: Secrets of Her Forbidden Knight by Ella Matthews* 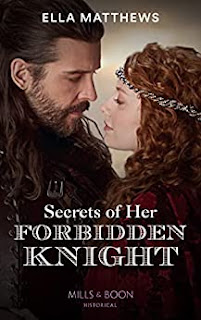 'She’s rescued a knight
Now she needs the favour returned…
When widowed Lady Johanne happens upon an injured knight, she sees an opportunity to form an alliance and protect her home, Castle Brae, from her enemies. The betrothal she proposes might be merely for appearances, but the very real attraction between her and Sir Alewyn thrills and disturbs her. For it’s clear he’s hiding something… Can she trust him, with so much at stake?'
So this is the story of Lady Johanne and Sir Alewyn, which is told over the course of 17 Chapters. It is also the third book in a series called 'The Kings Knight's', previous books include The Knight's Maiden in Disguise and the Knight's Tempting Ally. The first two books concentrated of Sir Alewyn's fellow knights William and Theo.
From the moment I started this book I found it engaging and interesting. I was immediately hooked on the story as well as the characters. This made the story easy to get into, so this reader had no problem powering their way through this story until I had read every last word.
The characters themselves truly could not be more different from one another. Lady Johanne is a widow who is determined to never marry a man again. Her experience has made her fiercely independent, possibly a bit too much. On the other hand Sir Alewyn wakes up in a strange place, covered in bruises and missing part of his memory.
Their story takes you on an adventure with two people who are drawn to one another but also refuse to admit this to themselves let alone anyone else. The characters in this book are likeable and believable which makes this book even easier to read.
Now let me tell you about the Author Ella Matthews, who works and lives in South Wales. When she isn’t thinking about handsome heroes she can be found walking along the coast with her husband and two children. Though she probably still be thinking about hero's but pretending to be interested in everyone else.
Overall I enjoyed this book and have loved reading this series. This reader personally can't wait for book 4 to be released. You can get your copy HERE
Until Next Time
Emma
XX

Posted by Lemon Nail Fiend at 18:30 No comments: 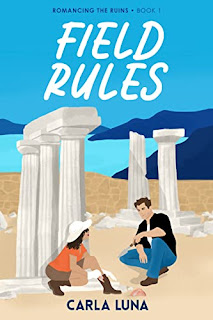 'What happens in the field, stays in the field. Or does it?
After the disastrous way her first archaeological dig ended, graduate student Olivia Sanchez abandoned her dreams of working in the field. Now, thanks to a last-minute teaching opportunity in Cyprus, she’ll get another chance to explore ancient history firsthand. This time, failure isn’t an option
But digging up the past takes on a whole new meaning when she’s forced to team up with her ex, shovel bum Rick Langston.
For years, Rick has proven his archaeological skills all over the Mediterranean. But with no graduate degree—and a habit of attracting trouble—his reputation could use a little rehab. All he has to do is play by the rules while he’s in Cyprus and he’ll secure a coveted recommendation for his next job. Until Olivia resurfaces like a cursed relic from the past
Given that their last fling nearly caused them both academic ruin, Olivia and Rick can’t afford to repeat their past mistakes. But as they work together under the scorching Mediterranean sun, the heat between them proves impossible to ignore.'
This is the story of Olivia and Rick, which is told over the course of 36 Chapters. Their story is set in the middle of the Mediterranean in the sizzling heat of Cyprus. But not to fear the location is not the only thing that is sizzling.
From the minute readers start this book they are pulled into an archaeology dig, a team with a great dynamic as well as this second chance romance. The team and the dig are enough to keep the reader engaged in the story but add in this second chance romance and it really is the perfect icing for this cake.
Not only does this book really jump straight into the story, it also jumps straight into our two main characters meeting again. Readers will be able to tell from this very first meet that these two characters have a history. As the story goes on, not only is the history revealed piece by piece but the sizzling chemistry between Olivia and Rick is also revealed.
Now let me tell you about the Author Carla Luna, who writes contemporary romance with a dollop of humor and a pinch of spice. Carla is a former archaeologist, who still dreams of traveling to far-off places and channels that wander lust into the settings of her stories. When she's not writing, she works in a spice emporium where she gets paid to discuss food and share her favourite recipes. Her passions include Broadway Musicals, baking, whimsical office supplies and pop culture podcasts. Though she has roots in Los Angeles and Vancouver Island, she currently reside in Wisconsin with her family and her feisty Siberian cat.
Overall I enjoyed this story. Not only did I love the second chance romance which is the main theme of the book but also the archelogy aspect of this book. You can get your copy HERE
Until Next Time
Emma
XX

Posted by Lemon Nail Fiend at 14:30 No comments: