So a few months back I got a new Deodrant within a Glossybox. It was the Soft & Gentle Hair Minimise one, a full size product. The first thought that came to mind when I got this was 'I wonder if it works?' So here is the results when I decided to put this deodorant to the test with an ordinary one. 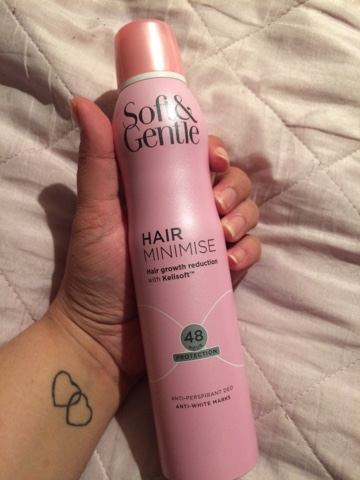 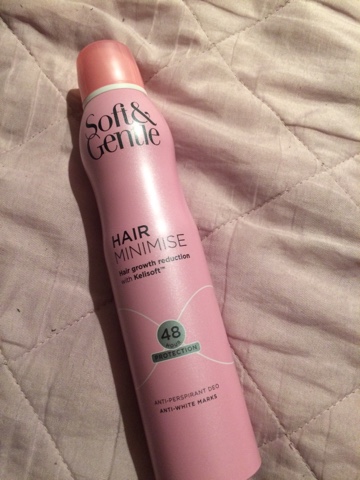 So the way I decided to carry out this experiment was to use this deodorant on one underarm and a normal sure deodorant on the other. Now this deodorant says you will have visibly underarms in just 8 weeks.  It uses an ingredient called Kelisoft, which is proven to reduce thickness and the speed of growth of your hair.

Now this experiment lasted about a month before the sure deodorant ran out, which is the main reason it wasn't tested as long as I wanted to but still it came out with some good results.

Within this month I still shaved my underarms as often as I usually did. But on day 20 I noticed that on the soft & gentle underarm the hair was thinner and softer to the touch compared to my other one.

I wanted to put this product to the ultimate test so on day 24 of the experiment I showed both underarms to two separate people. Now before I say what they said I want you to know that neither person knew the other and they were asked separately and not told what the other one said. It had been about 4 days since I had last shaved my underarms.

Both people agreed and said they could visibly see the hair on the underarm that was using the sure deodorant and could not see hair on the other arm. Now you may be thinking how close where they to me when I asked them to see if they could see any hair growth. The first person I asked was turned round facing me on a bus as I sat behind her. The second was sat diagonally to me on a balcony. Neither person was too close, because let's face it no one wants to be too close to an armpit after the end of a long day at work.

Now you are probably reading this thinking, yeah get to the catch, is this thing going to cost me an arm and a leg to buy? I would be lying if I said I didn't think the same thing but we would be wrong. A 250ml bottle of this from Superdrug will set you back £2.99. So as you can tell it is hideously expensive product and is such a splurge.  Ok sarcasm aside it's probably not the cheapest out there but it certainly is not the most expensive deodorant.

I would highly recommend this product especially if you consider yourself a Lazy Girl, because this will reduce the amount of times you need to shave those underarms.

Let me know if you have this product and what you thought.

Posted by Lemon Nail Fiend at 10:00 No comments: