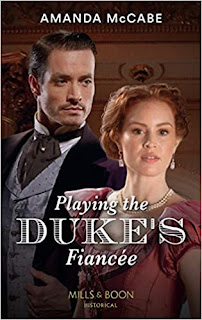 'A pretend proposal
For the unconventional heiress
When American heiress Violet Wilkins crosses paths with William, Duke of Charteris, she has extremely low expectations of the “Duke of Bore.” But when this seemingly stuffy aristocrat offers her escape from a dreadful arranged marriage, she leaps at the chance! To her surprise, the arresting Charles whisks Vi into an exhilarating make-believe romance. And as she gets to know the man behind the title, she can’t help wanting more…'
This is the story of Violet and William, which is told over the course of 21 Chapters. The book is full of moments that readers will love. Not only that the characters themselves are well developed but readers will be able to see how much effort the author has put into developing them.
One thing that really stands out in this book is the descriptions and not just the descriptions of the scenery. Which are outstanding, and to the point that readers will be able to visualize the beautiful places where this book takes place. The Character descriptions are brilliant. They are detailed and readers will be able to visualize them just like a movie that's playing for them.

Now let me tell you about the Author Amanda McCabe, who wrote her first romance at the tender age of sixteen, it was a vast historical epic starring all her friends as characters. It was written in secret during her algebra class; her parents wondered why math was not her strongest subject. She may have never used algebra since but her books have been nominated for many awards including the RTA Award, the Romantic Times BOOKReviews Reviewers' Choice Award, the Booksellers Best, the National readers Choice Award and the Holt Medallion. She currently lives in Santa Fe with a Poodle, a cat, her wonderful husband and far too many books and royal memorabilia collections. When she is not reading or writing, you can find Amanda taking dance classes, collecting cheesy travel souvenirs and watching the Food Network (even though she doesn't cook). Amanda also writes for Grand Central Publishing as Laurel McKee, the Elizabethan Mystery series as Amanda Carmack and the Manor Cat Mystery Series as Eliza Casey.

Overall this is a well written book full of scenes and moments that readers will gobble up. Better yet this is the second book in the 'Dollar Duchess' Series. Make sure you check out the others in this series, I know they will be added to my TBR. You can get your copy HERE.

Until Next Time
Emma
xx
Posted by Lemon Nail Fiend at 11:00